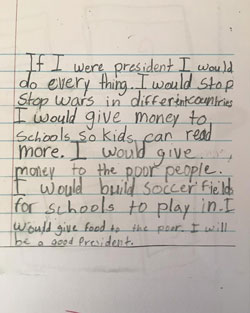 The following narrative tells the story of how Maduso and Lancine Fofana came to the decision to make this special project for the children of Siguiri, Guinea a reality.

In the summer of 2009, Mohamed Fofana traveled to Siguiri, Guinea with his mother Maduso to visit family and friends and see the town where his parents grew up. He was struck by the number of children who had to work in the marketplace or beg on the streets because their parents could not afford to send them to school. Upon leaving, Mohamed left all of his personal items behind, donating them to the children because they needed his clothes more than he did. That fall for a school project, Mohamed wrote a journal about his experience and how he dreamed of someday being able to help the children in Siguiri get an education like he received in the United States. Tragically, Mohamed was not able to realize his dream because he was lost to us in a horrific landslide while on a school field trip. Upon going through his belongings after his death, Mohamed’s mother found his journal and with his father, set out to make his dream come true.

“We want to do this project because this is what Mohamed dreamed of doing when he grew up. He wanted to help the less privileged children in Africa by building a school and also a soccer field. He thought of this when he went to Africa in 2009. He saw children going to school with no shoes and many working in the markets because their parents could not afford school fees. This was the reason why he wrote, “When I grow up, I want to be a professional soccer player so that I can save lots of money for me to achieve my dreams.” As parents, since Mohamed did not live to achieve his dreams, we’d like for them to come true by the help of almighty God and all of you who make this possible. That is why we named the school after Mohamed. (Mohamed Fofana Memorial School)”

To honor Mohamed and how he inspired and touched us all, the Mohamed Fofana Memorial School will support the children of Siguiri by increasing school attendance, decreasing child labor, and discouraging child marriage for young girls. Currently, primary school attendance in Guinea is only 54% for males and 48% for females. 4 out of every 10 children age 5-14 are engaged in child labor, and 76% of girls in this region marry before age 18. The Mohamed Fofana Memorial School will support families and create a safe space to provide education in this underserved community. Amenities will include a library, media center, indoor and outdoor basketball court, landscaped courtyard with amphitheater, and a full sized soccer field, setting the school apart from traditional crowded and minimalistic facilities.

The Mohamed Fofana Memorial School and its surrounding landscape will be designed to accommodate the regional climate and each student will plant a tree around the perimeter of the courtyard as they begin their years at school, providing shade and soil retention during heavy rain seasons. The school in its entirety will be a beautiful and enduring design as a way of honoring Mohamed’s name for many lifetimes to come.